Jack LaLanne: A Fitting End At 96

Jack LaLanne: A Fitting End At 96

He Took Exercise Out of Gyms and Into Living Rooms‏

Fitness guru, Jack LaLanne died yesterday of pneumonia.
He was 96. A self proclaimed sugar addict as a kid, a by chance meeting with legendary health advocate, Paul Bragg, changed his life. Bragg told him, quite bluntly, “You’re a walking garbage can.” This statement evidently struck a nerve in young Jack.

He immediately went home and built a gym in his backyard where he began spending two hours everyday lifting weights and one hour swimming in a pool. Soon, he had neighborhood kids and even local police and firemen, join in with him. In 1936 he opened his first health studio that somewhat revolutionized the gym industry. He insisted on including athletes and women. Back then, coaches frowned on weightlifting.

And women, well, women just didn’t exercise, it wasn’t lady like. My how things have changed, and you can thank Jack for that! And, as one would guess, his studio thrived, so much so, that it grew into a chain across the country. I recall his physique on several magazines and articles relating his feats of strength endurance.

There are Pictures showing him hand-balancing with Les and Pudgy Stockton, Bert Goodrich, Vic Tanny, etc., were common in those days. In addition, he was oft times referred to as the “Endurance King”. I remember a story of how he cranked out over 1,000 dips! In 1957, on the “You Asked For It” television show, at the age of 43, he performed over 1,000 pushups in 23 minutes! At 60 years of age, while handcuffed, shackled and towing a boat, he swam from Alcatraz Island to Fisherman’s Wharf in San Francisco! However, my best recollection of him, as a young kid in the 50’s, was his television show. From the 1950’s to the 70’s, I remember the beginning of his show...

You would see his familiar silhouette, in the background, dressed in a dark jump suit, doing, what else, “Jumping Jacks”! With nothing more than a chair and a towel, he would instruct his audience on how to do simple exercises to the rhythm of organ music. Sometimes his wife Elaine and Happy, his ever present K-9 companion, would join in. “Breath in, now breath out”, he would say. Between exercises, he would give advice on what that particular exercise would achieve, diet, tips, etc. He stressed the importance of raw fruits and vegetables while suggesting the use of his “Jack LaLanne Power Juicer”. He would end his show with a song and back to the Jumping Jacks.

To this day, every time I see or do a jumping jack I think of Jack LaLanne, “The Endurance King”, and his TV show. Until the next time, Yours for greater strength, Bill Hinbern P.S. “Inactivity is the killer, and, remember, it’s never too late.” - Jack LaLanne (1914 - 2011) 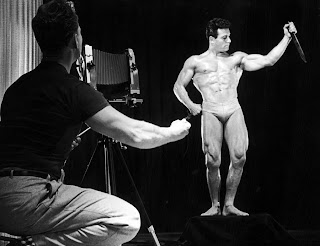 LOS ANGELES — Jack LaLanne, the fitness guru who inspired television viewers to trim down, eat well and pump iron for decades before diet and exercise became a national obsession, died Sunday 1-23-2011. He was 96.

LaLanne died of respiratory failure due to pneumonia Sunday afternoon at his home in Morro Bay on California's central coast, his longtime agent Rick Hersh said.

LaLanne ate healthy and exercised every day of his life up until the end, Hersh said.

"I have not only lost my husband and a great American icon, but the best friend and most loving partner anyone could ever hope for," Elaine LaLanne, LaLanne's wife of 51 years and a frequent partner in his television appearances, said in a written statement.

He maintained a youthful physique and joked in 2006 that "I can't afford to die. It would wreck my image."

"He never lost enthusiasm for life and physical fitness," the 87-year-old Barker told The Associated Press on Sunday. "I saw him in about 2007 and he still looked remarkably good. He still looked like the same enthusiastic guy that he always was."

Television staple
LaLanne (pronounced lah-LAYN') credited a sudden interest in fitness with transforming his life as a teen, and he worked tirelessly over the next eight decades to transform others' lives, too.

"The only way you can hurt the body is not use it," LaLanne said. "Inactivity is the killer and, remember, it's never too late."

His workout show was a television staple from the 1950s to the '70s. LaLanne and his dog Happy encouraged kids to wake their mothers and drag them in front of the television set. He developed exercises that used no special equipment, just a chair and a towel.

He also founded a chain of fitness studios that bore his name and in recent years touted the value of raw fruit and vegetables as he helped market a machine called Jack LaLanne's Power Juicer.

When he turned 43 in 1957, he performed more than 1,000 push-ups in 23 minutes on the "You Asked For It" television show. At 60, he swam from Alcatraz Island to Fisherman's Wharf in San Francisco — handcuffed, shackled and towing a boat. Ten years later, he performed a similar feat in Long Beach harbor.

"I never think of my age, never," LaLanne said in 1990. "I could be 20 or 100. I never think about it, I'm just me. Look at Bob Hope, George Burns. They're more productive than they've ever been in their whole lives right now."

Praised by Schwarzenegger
Fellow bodybuilder and former California governor Arnold Schwarzenegger credited LaLanne with taking exercise out of the gymnasium and into living rooms.

"He laid the groundwork for others to have exercise programs, and now it has bloomed from that black and white program into a very colorful enterprise," Schwarzenegger said in 1990.

In 1936 in his native Oakland, LaLanne opened a health studio that included weight-training for women and athletes. Those were revolutionary notions at the time, because of the theory that weight training made an athlete slow and "muscle bound" and made a woman look masculine.

"You have to understand that it was absolutely forbidden in those days for athletes to use weights," he once said. "It just wasn't done. We had athletes who used to sneak into the studio to work out.

"It was the same with women. Back then, women weren't supposed to use weights. I guess I was a pioneer," LaLanne said.

The son of poor French immigrants, he was born in 1914 and grew up to become a sugar addict, he said.

The turning point occurred one night when he heard a lecture by pioneering nutritionist Paul Bragg, who advocated the benefits of brown rice, whole wheat and a vegetarian diet.

"He got me so enthused," LaLanne said. "After the lecture I went to his dressing room and spent an hour and a half with him. He said, 'Jack, you're a walking garbage can.'"

Soon after, LaLanne constructed a makeshift gym in his back yard. "I had all these firemen and police working out there and I kind of used them as guinea pigs," he said.

He said his own daily routine usually consisted of two hours of weightlifting and an hour in the swimming pool.

"It's a lifestyle, it's something you do the rest of your life," LaLanne said. "How long are you going to keep breathing? How long do you keep eating? You just do it."

In addition to his wife, he is survived by two sons, Dan and Jon, and a daughter, Yvonne.
Posted by Leon Cruz at 8:57 AM No comments: