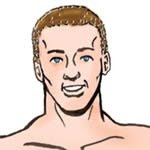 Background: In the early 70's Arnold Schwarzenegger burst onto the bodybuilding scene. And he brought the idea of "volume training" into the lime light. After all... if it made a champion out of Arnold, then surely pumping iron for 3 hours a day was the way to go. Right? Right?
Well... maybe not.

While many guys attempted to tackle the Herculean volume training regimen that Arnold developed... it flat out didn't work for 99.9% of trainers.
The reason? The volume of training that Arnold recommended was far too much for the average joe.

Enter Mike Mentzer.
Mike Mentzer made a name for himself by saying the opposite of what everyone else in bodybuilding was saying.

While all the muscle-heads were telling people to work out six days a week... Mentzer talked about working out once every 14 days.
When the pro's advised people to hit the muscle from all different angles and perform multiple exercises for each body part, Mentzer said that one exercise per body part was enough.
When most bodybuilders were recommending 15-20 sets per body part, Mentzer recommended just one set per exercise.

The Argument: While most bodybuilders believe that you had to include a variety of exercises and a large volume of sets to adequately work the muscle and activate the growth mechanism, Mentzer differed.

Mentzer reasoned that if you perform one set... and you perform that set until your muscles can move the weight no more... wouldn't that be enough to activate the growth mechanism?
The Experiment: I was intrigued by Mentzer's approach and I thought the idea of one-set to failure made sense. So in 1999 I hired Mike Mentzer for a series of phone consultations.

There wasn't much small talk, but I do remember Mike asking me specifically about a brand new website that had just launched at the time. It seems there method of attracting attention was to go after Mike and try to bash not only his theories but everything else about him as well.
Mike started me out with only two workouts per week. He also told me that the actual amount of protein, carbohydrates and fat I was ingesting per day wasn't important. He said that a balanced diet was fine and that I should eat frequently but not obsess over the nutritional aspect.

After a month, I had gained weight but my strength increases were moderate at best. Mike reduced my training workout down to one workout every seven days. Ultimately, he took this all way down to once every nine days but I still never gained much strength or made much progress in the gym.

The Result: The result of this training program was a failure. I gained very little strength and my over-all level of conditioning actually worsened from so much in-activity.
The Good: I personally believe that Mike Mentzer advanced the sport of body-building a great deal by questioning whether or not it's really necessary to do more than one set to failure.

This principle... and the logic behind this principle... still guides much of what I do today in my training programs.
The Bad: Unfortunately, I think Mike's version of High Intensity Training had some serious flaws.

First and foremost, Mike's thinking on nutrition was seriously flawed. Without proper protein intake, you simply cannot gain massive amounts of muscle.
Second, Mike only had one solution for every problem. You know the saying, when all you've got is a hammer... all the world looks like a nail?

Well, Mike took that to heart. For example, if progress stalled the solution he proposed was always to train less or take more time off.
At times, he took this to extremes. For example, I told him that my calves were one of my biggest weak points and asked him what we could do about that. His solution? Stop training calves all together and see if they would grow from the indirect work of squats and other leg training.

Needless to say... this approach didn't work. Although many a times I've wished my muscles would grow simply by not doing anything... it simply doesn't happen.
Another flaw of the program is assuming that every person is capable of generating the kind of intensity necessary to trigger muscle growth in just one set.

For example, it's relatively easy to fry your biceps with one set of bicep curls. But when was the last time you saw someone truly perform one set heavy barbell squats to COMPLETE muscular failure? Or go to complete muscular failure with 1400lbs on the leg press machine? Frankly, it just doesn't happen because it's incredibly exhausting both on the body and on the mind.
Overall: If you've been volume training for years and feel burned out, you might find Mike Mentzer's H.I.T to be a nice change of pace. You'll probably experience some new muscle and strength gains during the first few weeks.

But unless you address the nutritional and intensity flaws of the program, your progress will ultimately stall.

Average White Dude Final Rating For Mike Mentzer's High Intensity Training: 6/10.
Not the worst training program, but far from effective for most average dudes.
Posted by Leon Cruz at 12:06 PM