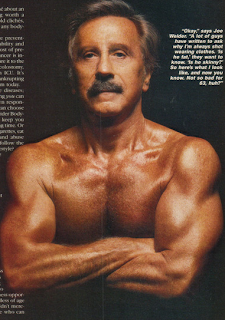 By the time you read this you may have heard that Joe Weider passed away. Joe died on March 23, 2013 at the ripe age of 93, eight months from his 94th birthday, which is on November 29th. What can I say about Joe Weider that has not been said already by those who actually knew him. I do not want to bore you with the usual stuff. I would like to talk about how Joe Weider impacted my life. Although I did not know Joe Weider nor did I ever meet him, he did have a profound impact on me through his magazines, supplements and training equipment. Joe Weider was a master marketer. He knew how to sell his products to the masses especially to young boys, which I was when I started lifting weights and training to build my body. I remember the snowy day I went with my mom to buy my first weight set. I was twelve, and for Christmas my mom and I went to T.S.S., which stands for Time Square Stores. These stores were popular back in the early 1980’s. They are all long gone by now. This was the place I bought my 110 pound vinyl cement filled weight set. Looking back, I have to say that I did not know anything about equipment back then. If I did I would have purchased the iron set instead. The weight set I purchased was from Billiard Barbell. I began my training by following the little exercise poster that came with the set.  It’s the only thing I knew to use back then. My older sister (Lori) was in high school and many of her friends that knew me were impressed that I started to weight train.

This Blog is protected by copyright, 2013, with Leon Cruz

Reproduction of any portion of this Blog is strictly prohibited

without the express written consent of Leon Cruz Enterprises, Inc.